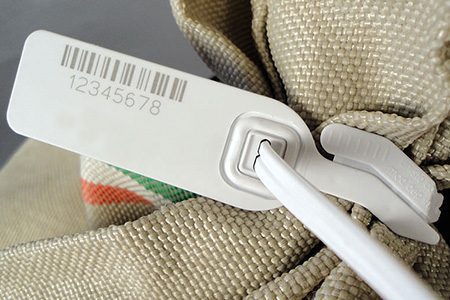 Do you transport large amounts of goods? Do you know that it is at this point that your business is at its most vulnerable? Determining the location of theft and identifying suspects can prove to be extremely challenging. Implementation of systems to follow up when theft does occur is an absolute necessity. Barcode security seals play a vital role in counteracting and acting upon instances of product theft.

Moving goods cross country? Establishing checkpoints along the way will allow you to determine who is where and when. Many of our products have barcode security seals that can be customized to suit your businesses’ pre-arranged systems. Scanning at intervals along the journey, especially at handover points will allow you to keep track of your packages. The number of checkpoints will determine the accuracy with which you can pinpoint theft.  The goods move through checkpoint A – F just fine but get lost between checkpoints G – H. You then have a “Where”.

Keeping with the checkpoint system, a good system should include timestamps. We’ve established a location – we know that the theft took place between points G – H since the package was last scanned at G. With the additional factor of timestamps, we can ascertain that the package left point G at 10pm. It was supposed to arrive at the H destination a few hours later at 12:30am, meaning that the goods were stolen at some point in that timeframe.

With this information to hand, it shouldn’t be too difficult to determine which drivers were on duty and which areas they had been passing through at the time. Even though trucks are equipped with GPS, the goods are not. Where it would once have been possible to claim that the goods just went “missing” along the way, there is now definite evidence of the goods having been logged at one point and not at another.

When it has become common knowledge that these security measures have been set in place, attempts at theft may dramatically decrease. It is no longer easy to make away with stolen goods. Ultimately, taking steps to prevent crime from taking place is far better than having to deal with the aftermath.

TruSeal is South Africa’s leading manufacturer of security seals and bags, serving clients like FNB, Standard Bank, Spar, and Fidelity. We are able to consistently deliver products and services that compete at the highest international level.

Get in touch with us so that we can assist you in choosing the barcode security seal product that best suits your budget and needs. We look forward to hearing from you.