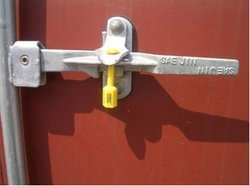 Much has been written about high security bolts and seals and their ability to prevent tampering and theft but in order to fully understand these security measures, one needs to look at what goes into bypassing security seals too.

Transporting cargo internationally requires the use of bolts and locks that adhere to the ISO 17712 standards. The International Organisation of Standards (ISO) ensures that products are safe and dependable for use and that a uniform standard is applied to the manufacturing process. This requires independent testing in three categories: mechanical testing for physical strength, testing of tamper evident features and an auditing process of the manufacturer’s business procedures.
However, an ISO 17712 stamp of approval doesn’t necessarily mean that high security seals are indestructible. Criminals have devised various ways for bypassing security seals to get to the contents of a container. In this article we will explore some of the most common ways they achieve this.

All security seals act as a deterrent but not all seals are tamper-evident. These seals are commonly referred to as tamper-evident seals as they make any evidence of manipulation self-evident. Bolt seals are commonly used on cargo and freight containers and fall under the category of tamper-evident seals. These are high security seals and are ISO 17712 compliant. Despite this, criminals have found ways around this and it has been determined that they have found a way to breach the devices, enter containers and steal valuable cargo.

The most obvious way of bypassing security seals with a high security rating is by using specialised bolt cutters to destroy the seal. Naturally, evidence of tampering here would be apparent. The bolt is then replaced or even “repaired”. It is for this reason that TruSeal encourages the use of bespoke branding or laser engraving your company’s logo into the bolt seal. This could act as a further deterrent, especially if a tight audit trail is applied.

Unfortunately criminals have now taken to counterfeiting seals and so branded seals can quickly be replaced making it less obvious that the bolt has been breached, allowing more time to pass before the trespass becomes obvious. In doing so, the audit trail is effected, making it harder to determine when the violation has occurred. These seals are sub-standard quality and do not provide adequate protection.

Another way of bypassing security seals on cargo containers is by forcibly removing the rivet located on the door handle. It singularly secures the right side trailer to the vertical locking bar. In fact this way is incredibly effective because access to the container is unfettered and the rivet is easily replaced. The seal remains intact and no one is left the wiser until the freight has arrived at the destination.

Syndicates may also act to remove the entire right side rear container door from their hinges when bypassing security seals. Heavy lifting machinery is used to do this.

There are other few other ingenious ways to circumvent high security seals that are worth mentioning.

Criminals have been known to freeze the seal. Water is poured into the security seal and they then immerse the seal in foam or powder from a fire extinguisher, making it easy to snap off.

The locking mechanism of the cable seal is leveraged open using a pick of sorts, which is forced between the seal and cable to pop it open. They may also strip out the cable and then later replace it using a twist and pull method. The soft outer jacket of the cable seal is vulnerable to this kind of manipulation too.

Bolt seals are sometimes spun out or the barrel is severed, the locking head drilled out and once the theft has occurred, the body is replaced.

As we can see, a determined criminal has ways and means to overcome high security seals. Armed with this information, TruSeal offers the following recommendations to companies to prevent access to your goods:

Laser-etching your company’s logo, barcodes and sequential numbering onto the seal.These unique identifiers not only serve to act as free advertising while your cargo is in transit but also as a deterrent against tampering and theft. It is important to store your bolts and seals in an area with restricted access.

Create a well-documented audit trail to ensure that employees are held accountable every step of the way. Sequential number and barcodes should be recorded and monitored frequently during transit.

Ensure that the rivet mentioned earlier is well protected. Use a seal to fortify the vertical locking bars on the container and protect the exposed rivet in the door handle. It is possible to purchase apparatus to do this.

Make sure that your company is well prepared with the correct tools to access the container once it arrives at the destination. It is preferable not to delay the process.

Application should be monitored and documented and a log book should be kept to identify both the applicant and the supervisor, with time stamps.

Once the goods have arrived at the destination, compare the sequential number and barcodes to the information recorded initially and verified as intact. The seal should not be removed by an unauthorised party.

Inspection of the seal, should include the vulnerable points of the actual container too.

Bypassing security seals is possible but with added security measures in place, criminals would need to work harder to achieve this. However, should all these measures be in place and worse come to worse, the container be unlawfully accessed, the claim inspector would be more inclined towards an amicable settlement.

Speak to one of our trained TruSeal consultants about our ISO 17712 compliant bolt or cable seals.