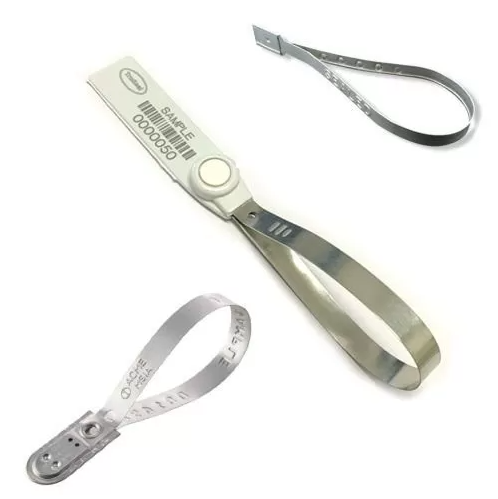 Tamper evident security seals (like Metal Indicative Seals) are metal security seals used to seal cargo or valuables when in transit and provide some level of security. But rather than providing a strong barrier to prevent entry or theft, these seals are designed in such a way as to show obvious visual evidence of any attempt to tamper with or gain entry to the goods.

Barrier Security Seals (for example Bolt Seals) will actually prevent entry much like a strong padlock would. But in addition they are uniquely barcoded and/or serial numbered so that is possible to tell if they have been removed and replaced. Bolt seals are most commonly used to secure sea freight containers as well as trucks and trailers. Offering far more security than a traditional lock, bolt seals are made of extremely tough materials and cannot easily be forced open. More importantly, tampering can easily be proven. The plastic-coated bolt and locking bush are laser marked with identical sequential numbers, essentially preventing attempted covert part swaps, or other means of subterfuge following tampering. Of course, proper security protocol must be implemented and adhered to in order for tamper detection to be effective.

Tamper evident metal security seals on the other hand are a psychological deterrent: This kind of metal security seals show signs of unwanted entry, which makes theft far more difficult. Once potential thieves realise that they cannot easily remove a few items, or open a package without anyone knowing, theft is less likely to occur. Simply because the loss is likely to be detected very quickly when it is handed over to the next person in the chain of custody.

Those who truly wish to protect their product, documentation, cash, or goods, TruSeal has you covered. TruSeal continues to evolve as new technology becomes available and our tamper evident seals provide world-leading security to protect your business.

TruSeal Metal Strap Seals are fixed-length seals constructed of tin-plate steel. The TruSeal ACME T Metal Strap Seal’s unique double locking action and the inspection holes built into the lockbox make it easy for security personnel and the customer using the seal to view the tips of the “T” mechanism within the lockbox, which shows whether the seal has been properly locked and whether it has previously been tampered with.

The ACME Seal also comes in an encapsulated option called the ACME Encapsulated T Metal Strap Seal. This seal’s extra feature is the polypropylene cover encapsulating the metal lockbox, a feature that does not impede the seal functionality or effectiveness whatsoever, but merely provides for barcoding, colour-coding, and other individual security marking. These covers can be custom laser marked with company logos or the customer’s name. They come in a range of colours and are laser marked with sequential numbering for added security.

TruSeal Padlock Security Seals are designed to discourage opportunistic stealing, to show evidence of tampering, and to prevent contamination or trafficking of smuggled goods. Of course the correct security protocols and procedures are vital in the effectiveness of security seals, as evidenced by research.

TruSeal Bolt Security Seals are designed to discourage opportunistic stealing, to show evidence of tampering, and to prevent contamination or trafficking of smuggled goods. These are manufactured from steel and covered in plastic. Our Bolt Security Seals are anti-spin 18mm ISO and require a strong break force averaging 1300kg. They are removed by bolt cutter. TruSeal Bolt Seals are single-use seals, which make them more secure.

Of course the correct security protocols and procedures are vital in the effectiveness of security seals, as evidenced by research. These protocols include procedures for obtaining seals, fitting, inspection, storage, removal, disposal, training staff, recordkeeping, reporting, and interpretation of findings. Our Bolt Security Seals have a serial number on the pin & lock bush. When applying the correct protocols, you can trust TruSeal seals to prevent bypassing of the seal by professionals or trained individuals. TruSeal aims to minimise the risk of tampering and the temptation of theft by making their seals harder to tamper with and their product of the highest quality with technology to make tampering easy to spot and theft harder to accomplish.